Economic Survey 2019: Need to double down on reducing policy uncertainty and to Adopt micro-irrigation systems 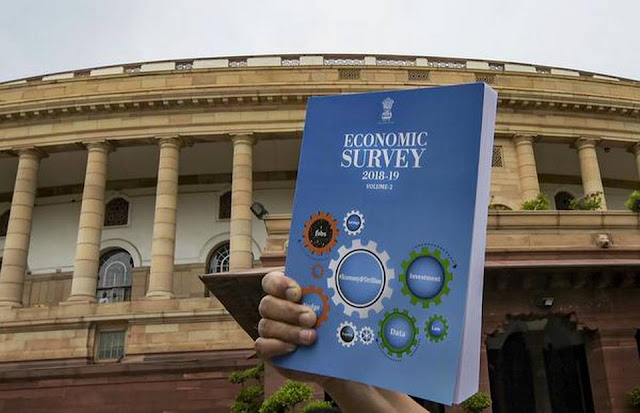 Economic Survey 2019: Need to double down on reducing policy uncertainty and to Adopt micro-irrigation systems

Expressing concern over the massive extraction of groundwater for agriculture, the Economic Survey 2019 has recommended adoption of micro-irrigation systems (MI) to improve water use efficiency. It can be seen that the states with penetration and improved adoption of MI systems have almost 40 to 50% savings in energy and fertilizer consumption, remarked the survey presented in Parliament by Finance Minister Nirmala Sitharaman on July 4, this year.

Following the document, In India, according to the Asian Water Development Outlook, 2016, almost 89 per cent of groundwater extracted is for irrigation. There is a major concern whether the present practice of groundwater use can be sustained as the depth of the groundwater level continues to drop. By 2050, India will be in the global hot spot for "water insecurity", the economic survey asserted.

The #EconomicSurvey2019 outlines a vision to achieve a $5 Trillion economy.

It also depicts the gains from advancement in the social sector, adoption of technology and energy security.


Moreover, It also pointed that the cropping pattern in the country was highly skewed towards crops that are water intensive, and the incentive structures like Minimum Support Price (MSP), heavily subsidised electricity, water and fertilizers played a significant role in the misalignment of crop patterns.

“Adopting improved methods of irrigation and irrigation technologies will have a critical role in increasing irrigation water productivity along with re-calibrating the cropping patterns… Adoption of micro-irrigation systems (MI) is one of the possible ways to improve water use efficiency,” the Economic survey asserted.

Further, It suggest that the costs of installation of MI systems can be a disincentive unless subsidies were given by the government to small and marginal farmers. It also mentioned a combination of measures which suit the local agro-economic context need to be applied to improve irrigation productivity in agriculture which would reflect sustainable water use in agriculture.

Following this, focus in agriculture should shift from ”land productivity” to "irrigation water productivity”. Therefore, devising policies to incentivise farmers to adopt efficient ways of water use should become a national priority to avert the looming water crisis,”.

As per document highlights, Noting that policy uncertainty in India had declined over the last few years, the Economic Survey 2019-20 has called for predictable actions from policy-makers and use of labels such as “Standstill” versus “Ratchet up” to categorize many policies, among other steps, to ensure a stable investment climate.

Read Also, Need to double down on reducing policy uncertainty

Significantly, The survey suggested that top-level policymakers must ensure that their policy actions are predictable, provide forward guidance on the stance of policy, maintain broad consistency in actual policy with the forward guidance, and reduce ambiguity/arbitrariness in policy implementation.

“To ensure predictability, the horizon over which policies will not be changed must be mandatorily specified so that the investor can be provided the assurance about future policy certainty,” the annual document asserted. After various coalition governments at the Centre, the Prime Minister Narendra Modi-led BJP crossed the majority mark on its own to form the government in 2014. It came back to power in May this year again after winning a landslide victory adding to stability and continuity in policies.

Despite all of this, The Economic Survey states that the ecosystem for insolvency and bankruptcy is getting systematically built out with recovery and resolution of significant amount of distressed assets as well as palpably improved business culture. Till March 31, 2019, the Corporate Insolvency Resolution Process yielded a resolution of 94 cases which has resulted in the settlement of claims of  Rs 1,73,359 crore. Moreover, as on 28 Feb 2019, 6079 cases involving a total amount of Rs 2.84 lakh crores have been withdrawn before admission under provisions of IBC. Further, as per RBI reports, Rs 50,000 crore has been received by banks from previously non-performing accounts.  RBI also reports that additional Rs 50,000 crore has been "upgraded" from non-standard to standard assets. All these shows behavioural change for the wider lending ecosystem even before entering the IBC process.

Meanwhile, Chief Statistician of India and Secretary, MoSPI, Pravin Srivastava has welcomed the Economic Survey 2019 for its emphasis on various sectors of economy and to provide a direction to overcome the constraints as India marches towards a 5 trillion-dollar economy. He stated that the Survey has given various strategies on boosting investment to fuel the virtuous cycle of economic growth, improved productivity, boosting consumption and channelizing savings into investment.

The Chief Statistician to the government of India added that Economic Survey has also compared the economic fundamentals of other growing economies and proposed a strategy for achieving economic equilibrium in a holistic manner. It also addresses the critical issue of harnessing the demographic dividend towards a more productive workforce. It has looked at the success of key Government programs like Beti Bachao Beti Padhao, Swachh Bharat Mission, etc. and how deepening these porgrams will improve the health outcomes in years to come.

The Secretary Ministry of Statistic and Program  Implementation lauded  Economic Survey for addressing the issues of unshackling the MSME sector through investment and labour reforms to increase productivity and create more jobs for labour force. It has rightly recognized that the economy can grow through empowerment of people using data for decision making and recognized that data is a public good, for which MoSPI is already taking major steps. He said that the Chief Economic Advisor and his team have done a great job by providing a refreshing strategy for the economy.

(With the inputs of Finance Ministry and Agency).