How ‘Majoritarianism’ shattered Constitution by forming govt in Maharashtra? 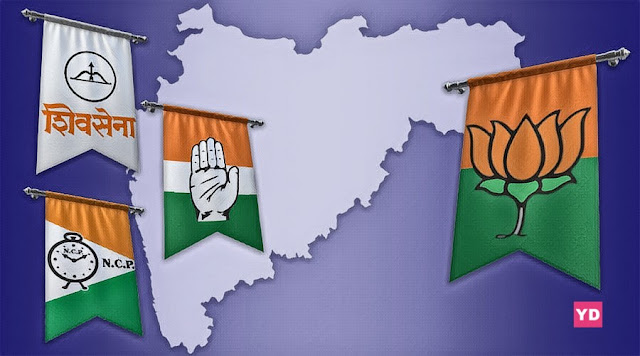 As per the, Senior Congress leader Pradeep Mathur on Nov 24 accused the ruling party of "Shattering the Constitution" by forming government in Maharashtra in coalition with the Ajit Pawar-led NCP faction and termed the move as "extremely unfortunate". He said while speaking to media reporters. Pradeep Mathur, the former Congress Legislature Party leader in the UP assembly, added that, "India had got freedom (From the British) at midnight and it was at the midnight that the Constitution was shattered to form the government in Maharashtra."

However, The 'Top Court' on Nov 24 asked Solicitor General Tushar Mehta to place before it on Monday morning the letters of the Governor recommending revocation of President's Rule and inviting Devendra Fadnavis to form government in Maharashtra. Further, A bench of Justices N V Ramana, Ashok Bhushan and Sanjiv Khanna also issued notices to the Centre and Maharashtra government on a petition filed by the Shiv Sena-NCP-Congress combine against the Maharashtra Governor”s decision to swear in Fadnavis as chief minister.

Mathur, "See the breach of his (Fadnavis) words and how much do they (BJP) hanker for power. This act is like back-stabbing the democracy. The most unfortunate part is that PM Modi always speaks about "Naitikta" (Morality) and Union Home Minister Amit Shah about 'democratic values', but they have broken their pledges. People of India are now realising their mistake of giving mandate to cheaters," Mathur told while talking to media reporters. "This is extremely unfortunate. Ajit Pawar betrayed his uncle and put him under a question mark," he added. Maharashtra CM Devendra Fadnavis had himself talked about not shaking hands with the NCP before the assembly elections but took a U-turn subsequently, The former Congress Legislature Party leader in the UP assembly, Pradeep Mathur remarked.

Mathur also emphasised upon the opposition's unity to reinstate democratic values. Asked whether Maharashtra developments would have any impact on poll-bound Jharkhand, "The opposition parties will now have to become cautious of the BJP moves. The BJP can stoop to any level to sabotage democracy." He remarked. Meanwhile, On Nov 23, Veteran Congress leader Digvijay Singh called it a mockery of the constitution and said, "BJP did the same in Goa, Meghalaya and other states. No MLA of the NCP will support this, Ajit Pawar has gone with them alone". While NCP leader Nawab Malik asserted that his party had taken signatures from MLAs for attendance, it was misused for the oath. "This government is formed by fluke but will not able to prove any majority at the floor test of the legislative assembly, all the MLAs are with us, he added.

Shiv Sena's Sanjay Raut's stated that, Ajit Pawar has backstabbed the people of Maharashtra and accused the ruling party of misusing the Governor's office for power. "The fact is that Ajit Pawar and the MLAs supporting him have insulted Chhatrapati Shivaji Maharaj and Maharashtra," Sanjay Raut asserted. "It was a black day for Maharashtra and this country. The manner in which he Fadnavis took oath was accidental. It has never happened in history.. It was a black Saturday. Why didn’t Shiv Sena and NCP get a chance to come and form government? If governor asks, we can right away form the government. We have the numbers to do so."

No question of forming alliance with BJP, Says Sharad Pawar

Sharad Pawar, On Nov 23, stated that, Ajit Pawar's decision to support the BJP to form the Maharashtra government was his personal decision and not that of the Nationalist Congress Party. “We place on record that we do not support or endorse this decision of his,” He said in a statement, distancing himself from the coup. Further, On Nov 24, he stated, "There is no question of forming an alliance with BJP for Maharashtra. NCP has unanimously decided to ally with Shiv Sena & INC Maharashtra to form the government. Shri Ajit Pawar’s statement is false and misleading in order to create confusion and false perception among the people".

What is happening in Maharashtra today happened in Uttar Pradesh in 1989. The sequence of events is strikingly similar and led to a change in the political complexion of the state. The erstwhile Janata Dal that had been formed with the coming together of the Janata Party, Jan Morcha, Lok Dal (A) and Lok Dal (B), had won the 1989 assembly elections and Chaudhary Ajit Singh had been declared as the party's chief ministerial candidate.

The Janata Dal in 1989 had won 208 seats which were short of six MLAs for a majority. The UP assembly, before the creation of Uttarakhand, had 425 members and 213 was the halfway mark. The then Prime minister Vishwanath Pratap Singh had declared that Chaudhary Ajit Singh would be the chief minister while Mulayam Singh Yadav would be the deputy chief minister, PTI news agency remarked.

Following the PTI, Preparations for a grand swearing in of the Janata Dal government were on when Mulayam Singh Yadav threw a spanner by rejecting the post of deputy chief minister. He staked claim to the chief minister”s post and was backed by legislators belong to the Jan Morcha faction. The then Prime Minister VP Singh decided that the chief minister would be decided through a secret ballot and senior leaders Madhu Dandavate, Mufti Mohammad Sayeed and Chimanbhai Patel were sent to Lucknow as observers to convince Mulayam Singh Yadav to accept Chaudhary Ajit Singh as chief minister.

Mulayam Singh remained unrelenting and with the help of erstwhile mafia don D P Yadav, he managed to bring 11 Ajit Singh loyalists to his camp. Senior leader Beni Prasad Varma also played a key role in this power game. The secret ballot was held in the central hall of the UP Vidhan Sabha and Mulayam won over his rival with five votes to become chief minister. He was sworn in as chief minister for the first time on December 5, 1989.

Thereafter, Mulayam Singh Yadav went on to become a major player in UP politics, while Chaudhary Ajit Singh – son of former Prime Minister Chaudhary Charan Singh - could never find a firm foothold in state politics. In 1992 , Mulayam Singh broke away from the Janata Dal and formed his own Samajwadi Party (SP) while Ajit Singh formed his Rashtriya Lok Dal (RLD) in 1998. Though the SP and RLD came together briefly in various elections, the sense of unease between the two leaders never dissolved completely and their relationship could never consolidate.

Despite the same, On Nov 24, Mr. Raut stated, Sharad Pawar is a national leader, if the BJP is trying to break his party, this will boomerang on the BJP. Even before the Assembly election, there was an attempt to break the NCP when the BJP poached people from the NCP. Poaching Ajit Pawar was their last move which has boomeranged. They were expecting around 25 MLAs to support Ajit Pawar. I hope the BJP has come out of that delusion now. Nearly all the NCP MLAs have returned, barely five MLAs may have stayed, and in return of five MLAs, the BJP has given Ajit Pawar Deputy CM position? They were supposed to be good at business but now are struggling,” Asserted Shiv Sena's Sanjay Raut's. Although, The Shiv Sena-NCP-Cong combine on Nov 24 told the Top Court that they have the majority in the Maharashtra Assembly and if Devendra Fadnavis has the numbers he should prove majority on floor of the House.

(INPUTS ARE BASED ON VARIOUS REPORTS AT YOUTH DARPAN).