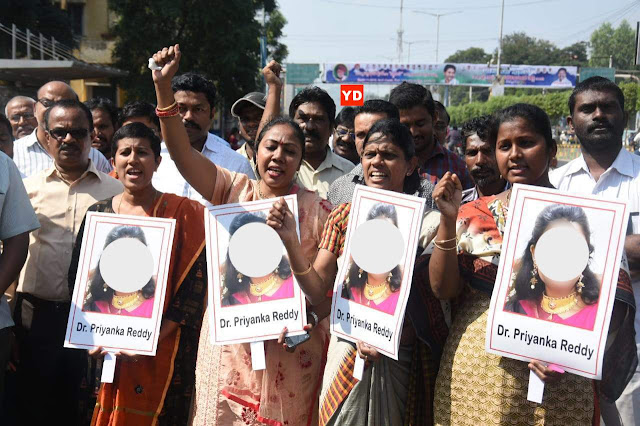 Following the gut-wrenching incident in which a twenty-seven-year-old veterinarian "Dr Potula Priyanka Reddy" was savagely murdered and her body was set ablaze after allegedly raping her in the Shamshabad neighbourhood of Hyderabad on November 27 night. As per the report, Victim's body was found on the outskirts of Hyderabad near the Chatanpally Bridge village in Rangareddy district on November 28, a day after she went missing.

Although, Veterinarian Potula Priyanka Reddy had called her sister around 9.22 p.m. (before the incident) stating that her Two-wheeler vehicle, parked at Shamshabad toll plaza, was punctured and somebody has offered to support her. And they had promised to take her vehicle for repair. While the victim's sister had advised her to leave the vehicle, go to the toll plaza and return home by a cab. However, when the sister later called her back, her mobile phone was switched off. "You Please keep talking to me for a while..I am scared." These were the last words urged by Dr Priyanka Reddy to her sister.

Notably, Telangana Home Minister Mohammed Mahmood Ali said that, "We are saddened by the incident, the police is alert and controlling crime. She was an educated woman, and yet she called her sister instead of 100 (police helpline),". "Had she called 100, she would have been saved. 100 is a friendship number, and we have to spread awareness on this among the people." He added while talking to ANI reporter. After it triggered a controversy, he clarified and stated that he was "deeply saddened by the mishap" and added that the victim was like his own daughter and "stringent punishment will be given to the culprit".

Members of the victims family had filed a 'missing complaint' after she did not return home by 10.20 pm on Wednesday, much to their dismay, her charred body was found the next day. However, The city police have arrested four people in connection to the crime. Lorry Driver 'Pasha', Cleaner 'Jollu Shiva', 'Jollu Naveen' and Cleaner 'Chenna Keshavulu' have arrested by the city police. The police also confirmed that a lorry driver named "Mohammad Pasha" from Narayanpet in Mahababub Nagar district was allegedly the main suspect.

Meanwhile, The National Commission for Women has also constituted an inquiry committee to probe the case. NCW's Chairperson Rekha Sharma asserted that the women's panel would not "leave any stone unturned" till the perpetrators get the punishment they deserve. In a letter to Sajjanar, The NCW's chairperson has argued that the commission is disturbed by the reported incident and is seriously concerned about the "safety and security of women".

"The National Commission for Women is constituting an Inquiry Committee headed by a Member, NCW to inquire into the matter. Considering the gravity of the matter, I request you to kindly investigate and take appropriate action in the matter," Rekha Sharma asserted in the letter. Following the Police official statement, Victim's was killed when they were trying to close her mouth while raping her,' Sajjanagar CP asserted in a statement. CP Sajjanar further asserted that this case was investigated in all dimensions and the accused will be presented in fast track court.

Union Minister of State for Home G Kishan Reddy also mentioned that he has been in regular touch with officials of the Telangana government so that those who were involved in the woman's murder are caught and punished. While the Ministry of Home Affairs will likely to send an advisory to all states as a precautionary measure so that no such incident takes place in future. The culprit should be arrested and given capital punishment, The Minister remarked.

Member of the Indian National Congress Mr Rahul Gandhi mentioned that, "I'm shocked to hear about the brutal rape & murder of Dr Priyanka Reddy in Hyderabad. How anyone could subject another human being to such terrible, unprovoked violence is beyond imagination. My thoughts & prayers are with the victim's family at this time of immense grief".

Telangana IT and urban development minister KT Rama Rao said he would personally monitor the investigation. Outraged and deeply anguished by the murder of Dr Priyanka reddy I am confident that Telangana DGP & the police will catch the animals who committed this heinous crime & deliver justice at the earliest. Anyone in distress, please dial 100, he added.

Thus, The heinous and inhuman crime in Hyderabad city has grabbed the attention of entire nation about the "safety and security of women" in India, 'The Beti-Issue'. Soon as the incident broke, many politicians including celebrities rallied on social media platform seeking justice for Dr Potula Priyanka Reddy. Seeking justice, Netizens (member of the community of Internet users) took to Social to vent their anger and frustration. With many demanding "death penalty" for the culprits.

However, The top leaders across the 'Party-Parivar' is yet in silent mode. May they are suffering from "credibility crisis" with regard to the Safety and Security of Women across the Nation. The condition of this incident is a "artificial tragedy", the "security lapses" of city police. Hence, the plans to shift "New India" into a majoritarian nation has completely crippled the "Beti-Issue" and this is resulting in increase of such heinous crimes.

In India, Whenever such rape case is highlighted we all begins outraging & demanding 'death penalty' for culprits. Why the hell people don't ask for a much 'affirmative society' where men don't rape? In the wake of same, We need to think beyond, so please teach your 'Son' how to respect a 'Daughter', It needs 'Psychological change' under family's norms and values, while many governmental policies were completely failed to get rid about the same. Despite all of this, We request to all media houses, including internet users that please don't broadcast-publish victim's clear photos because it contains quite unethical visuals.

Our prayers are with the victim's family, added TRILOKSINGH.ORG!