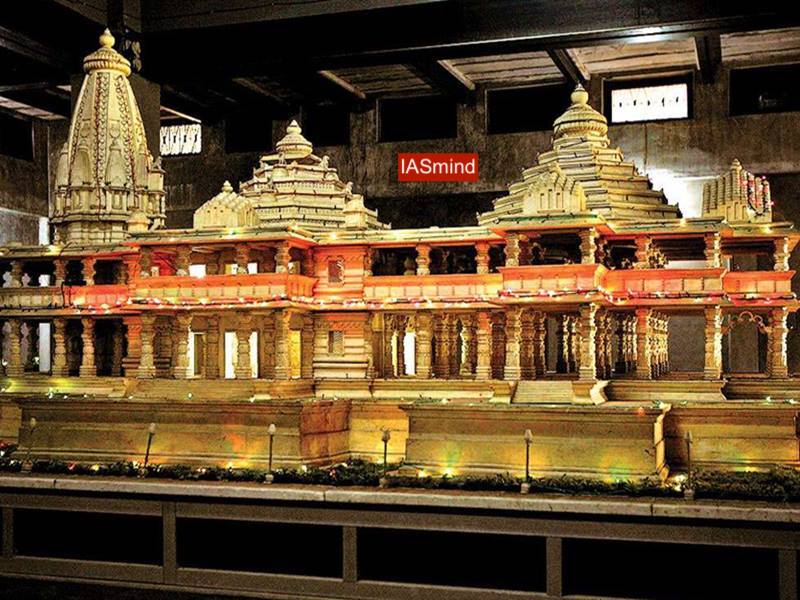 As per the TOI report titled, "If VHP design is followed, temple may take at least five year" attributed that, The decks have been cleared for construction of a Ram temple but it will take at least five more years and 250 expert artisans working tirelessly for the shrine to be completed, were it to be done according to Vishwa Hindu Parishad’s (VHP) design, the temple workshop’s supervisor has claimed.

As per the Top Court has cleared decks on Nov 09 for temple in Ayodhya, the Ram Janambhoomi Nyas along with the help from 'Vishwa Hindu Parishad' (VHP) will like to start its construction at the earliest. Though, the VHP has toyed with several maps of the "Ram Temple", as it conceived over the years; but there's a blueprint based upon the most agreeable version that the majority believes, resembles the original Ram Mandir. While for years, doors and pillars are being carved in Ayodhya, the sanctum sanctorum needs to be built, with great details, where Ram Lalla, the deity will be placed and worshipped. Though the walls of it are believed to be ready, the ''garbh griha'' (sanctum sanctoram) isn't. Moreover, A total of 212 pillars will be required across the temple. It will be assembled in two stages with 106 pillars each.

Almost half of the pillars are ready while half are yet to be carved. The assembly of pillars will take place in two tiers with the top tier having a roof. According to the approved design, the roof will have a "shikhar" that will give the massive structure a look and feel of "Bhavya Ram Mandir" (grand Ram temple). As per the report, The proposed structure will be 128 feet high. It will be 140 feet in its width and 270 feet in length. What makes this mammoth structure unique is there will be no use of steel as support base. The Ram temple will have 5 entrances: Singh Dwar, Nritya Mandap, Rand Mandap, Pooja Room and the all significant ''Garbh Griha'' with parikrama. Ram Lalla, the idol will be placed on the ground floor, itself. At least 1.75 lakh cubic feet of sandstone will be required for the full construction of the temple, as envisioned. A lot has been done, with the work starting as early as 1990. But a lot needs to be done as well.

Not just mere assembly, more sandstones, more carving experts and expansion of the existing carving centre in Ayodhya needed to run against time in finishing the temple. Even then, many sources say, it won't be an easy task but will require a minimum of 4 years to finish the work completely. Following this, "I cannot give you a time frame on when work will be finished. But we wish the construction to begin as early as possible, after completing the legal requirement", asserted Alok Kumar, the international working President of Vishwa Hindu Parishad to ians. One of the main reasons for time consumption is the accessibility to the "karyashala". The roads are uneven and hence the supply of stones are also slow. Moreover, the hand carving makes the process slower. However, the work for the ground floor is over, IANS News Agency attributed.

There is however a confusion, whether to erect a massive, gigantic statue of Lord Ram as many want, or not. The original concept just had Lord Ram's idol. It will need deliberation on the statue. But for now, the workforce needs manifold increase and the supply of stones will require to be far more regular to ensure the elusive Ram Mandir comes to being at the once disputed site of Ayodhya and stand tall, in time. Meanwhile, National general secretary, BJP, 'Ram Madhav' attributed at Indian Express and said that, "The Ram temple at Ayodhya will soon be a reality, now that the legal hurdles have been removed by the SC. Symbols of vandalism and iconoclasm at the most sacred places of Hindus, like Ayodhya, have been very big sources of embarrassment as the sentiments associated with such places are quite deep-rooted. It is not just about a temple or a mosque. There are any number of thriving mosques in the country.

There are more than a hundred mosques in the vicinity of Ayodhya, many of them unkept. It is about the renewed sense of assertion of a nation". Together, with a magnificent Ram temple at Ayodhya, shall rise a nation imbued with those values that Gandhi Ji whose 150th birth anniversary we are celebrating, used to describe Ram Rajya, Ram Madhav attributed. A British assistant commissioner of the Raj in Faizabad in the 1860s, is among those who played, unwittingly, a key role in providing champions of the Ram Janmabhoomi movement substantive material to make the case that Hindus had launched their struggle for the ‘janmasthan’ in Ayodhya much before the Ram Lalla idol was installed in 1949. Writing a historical sketch of ‘Fyzabad’, as he spelt it Carnegy wrote that, until 1855 “Hindus and Muslims alike used to worship in the mosque-temple.” TOI attributed.

On the one hand, UP Chief Minister Yogi Adityanath stated that, I welcome the Ayodhya Judgment. I express my gratitude towards the Supreme Court for the verdict. I appeal to all the people to maintain peace & harmony in the state & across the country. Director of India Foundation and BJP National general secretary Ram Madhav attributed that, Ram epitomised values like respect, love and dignity. And such values are not reserved for Ram’s own people alone, but everyone including the enemies. When he encountered Ravan on the battlefield, he was said to have bowed to him in respect before aiming at him. For him, material wealth alone was not the ultimate goal in life. “Even if Lanka were to be a kingdom of gold, I shall consider my mother and motherland to be superior to it,".

Whereas on the other hand, Mohan Bhagwat, RSS Chief asserted that, We welcome this decision of Supreme Court. This case was going on for decades and it has reached the right conclusion. This should not be seen as a win or loss.We also welcome everyone's efforts to maintain peace and harmony in society. For congress, We respect the verdict of the Supreme Court in the Ayodhya case. We appeal to all the parties concerned and to all communities to abide by the secular values and spirit of fraternity enshrined in our Constitution and to maintain peace and harmony. It is the responsibility of each one of us to reaffirm our tradition of mutual respect and unity among all that has defined our society through the ages, attributed congress.

LK Advani also asserted that, It is a moment of fulfillment for me because God Almighty had given me an opportunity to make my own humble contribution to the mass movement, the biggest since India’s Freedom Movement, aimed at the outcome which SC's verdict today has made possible. While PM narendra modi attributed that, "The Honourable Supreme Court has given its verdict on the Ayodhya issue. This verdict shouldn’t be seen as a win or loss for anybody. Be it Ram Bhakti or Rahim Bhakti, it is imperative that we strengthen the spirit of Rashtra Bhakti. May peace and harmony prevail! SC’s Ayodhya Judgment is notable because: It highlights that any dispute can be amicably solved in the spirit of due process of law", and the halls of justice have amicably concluded a matter going on for decades. Every side, every point of view was given adequate time and opportunity to express differing points of view. This verdict will further increase people’s faith in judicial processes. The PM remarked. Let's see the much-awaited structure of Ram Mandir in upcoming days, the government will very soon construct it at top priority.